What is window tint?

This is a fantastic article from Wikipedia explaining what exactly window film is. Excellent read for those that are researching window tint!
You can find the original article here Window Tint

Window film is a thin film or laminate that can be installed to the interior of glass surfaces in automobiles, boats, homes and buildings. It is usually made from polyester due to its clarity, tensile strength, dimensional stability; and ability to accept a variety of surface-applied or embedded treatments.

Window film can be generically described by the components it contains for performance and/or aesthetics; i.e. dyed, metallized, ceramic – or by its intended use. Uses can be roughly divided into automotive/marine where surfaces are often curved, and architectural where flat glass is usual. Window film is normally applied by professional service companies but there are also D.I.Y. kits widely available.

There are many different grades, shades, colours, and thicknesses of available window films built to offer solutions to a variety of challenges. Window films are a retrofit upgrade for existing glass that can be used to address problems inherent to glazing, including:[2]

Window films are an extremely cost-effective method to reduce heating and cooling costs in existing buildings by reducing the amount of heat transfer through glazing. 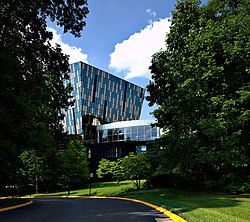 The colorful film on these windows gives the building a unique appearance while providing privacy and insulation from the sun.

Heat rejection films are normally applied to the interior of flat glass windows to reduce the amount of infrared, visible light, and ultraviolet (UV) radiation entering windows. Such films are usually dyed or metalized (which can be transparent to visible light) to convert incoming solar radiation to infrared radiation, which is then rejected back through the glass to the exterior. Modern window film technology has created ceramic window films which are non-metallic and do not contain dyes that can result in discoloration. The ceramic and metallic window films usually cost 10–15 percent more than regular window film but can reduce energy transmission by as much as 80 percent. Ceramic window films cost slightly more but provide a substantial increase in blocking UV rays and ability to control heat transfer.

To keep the sun’s heat out of the house, a low-emissivity coating should be applied to the outside pane of glazed windows. If the windows are designed to provide heat energy in the winter and keep heat inside the house (typical of cold climates), the low-emissivity coating should be applied to the inside pane of glazed windows. Such films also reduce the amount of visible and ultraviolet radiation entering a window, and are often applied to reduce fading of the contents of a room. Silvered film may also be employed to the same end. Spectrally selective films act by blocking certain wavelengths of the sun’s infrared radiation and reject heat without reducing natural light.

Security films are applied to glass so when the glass is broken it holds together, preventing dangerous shards from flying about, or to make it more difficult for an intruder to gain entry. Typically applied to commercial glass, these films are made of heavy-gauge plastic and are intended to maintain the integrity of glass when subject to heavy impact. The most robust security films are capable of preventing fragmentation and the production of hazardous glass shards from forces such as bomb blasts. Some companies have even experimented with bullet ballistics and multiple layers of security film. Another key application for security window films (safety window films) is on large areas of “flat glass” such as storefront windows, sliding glass doors, and larger windows that are prone to hurricane damage. These security films, if applied properly, can also provide protection for vehicles. These security films are often tinted and can be up to 400 micrometers (µm) thick, compared to less than 50 µm for ordinary tint films. If anchored correctly, they can also provide protection for architectural glazing in the event of an explosion. A layer of film (of 100 µm thickness or greater) can prevent the ejection of spall when a projectile impacts on its surface, which otherwise creates small dagger-like shards of glass that can cause injury.

Switchable films can be switched from opaque to clear by a safe voltage under 36V AC. In its opaque state, it can be perfectly used as a projection screen that is viewable from both sides. 3G switchable film also has UV (100%) and IR (94%) blocking functions and security function.

Graphic design films are generally colored vinyl or frosted. Frosted finish films closely resemble sandblasted or acid-etched glass, while vinyl films are available in a range of colors. Both types of films are commonly used in commercial applications.

Privacy films reduce visibility through the glass. Privacy film for flat-glass commercial and residential applications may be silvered, offering an unimpeded view from the low-light side but virtually no view from the high-light side. It may also be frosted, rendering the window translucent but not transparent. Privacy films for automobiles are available in gradients of darkness, with the darker tints commonly known as “limo tint.”

Correctly applied mirror film can create one-way mirrors. Note that in order to be effective the light differential must be from 6 to 10 times greater to maintain the intended performance. For example, the buildings in a city, during the daytime are difficult to see into, at night however, they can be seen in with ease and if a light is on in the interior space it is easily seen along with the contents.

Other benefits include protection for passengers in the rear of automobiles, protection from UV rays (which have some harmful effects), cooling for pets, greater privacy, reduced chance of theft (because valuables are less visible), reduced glare and reflection on liquid crystal display (LCD) screens, and protection for those who have conditions involving photosensitivity or skin sensitivity, such as lupus (SLE). Window film is also considered more effective and practical than stick-on blinds.

Protection from UV light can be accomplished by film that addresses only the UV spectrum. As UV is one of the main sources of fading, it can prolong the life of fixtures and fittings. Basic colorless clear films reject (absorbs) some UV radiation up to 380 nm, and depending on the manufacturer, UV inhibitors are added to the polyester, with specialist films offering protection to 400 nm. Tinted films are necessary for protection to 500 nm.

Window films filter out over 99% of UV rays to 380 nm, reducing the main factor in fading. However, additional factors such as solar heat, visible light, humidity, and presence or absence of chemical vapors also contribute to fading. Therefore, the greatest protection from fading is offered by tinted or metallised window films that reject large levels of heat and visible light, in addition to UV.

Not all films are suitable for all glass. The absorptance of the glass and the film, the size of the pane, the thickness of the glass, the construction of the window should be considered in terms of single pane, insulated glass, treated (with a low-emissivity coating), laminated or toughened.

Advice on the appropriate selection of film for the glass is vital to ensure that the glass does not crack as a result of thermal stress. However, it is possible that a pane of glass may break subsequent to the application of an appropriate film, because the pane has been damaged during the glazing of the window, or as a result of movement of the building or other physical stresses that are not apparent at the time of the application of the film.

Glass may crack subsequent to the application of sign writing or if heavy, thermally efficient drapes are hung close to the glass, particularly if the edges of the glass are damaged.

The chances of glass breakage occurring subsequent to the application of film or sign writing or the hanging of drapes, are very small. However breakage can occur and it is impossible to predict the edge condition of the glass without removing it from the frame – an approach that is not practical.

Heating and cooling systems have energy costs, and window films can used to increase building insulation. Modern windows with low-solar-gain glass do not need retrofit films, but since most of the existing windows do not have a low solar heat gain, window films make a lot of sense as a retrofit energy improvement. They can provide thermal comfort and are one of the most cost-competitive and environmentally-friendly energy improvements, especially in hot and mixed climates.

Under certain conditions, window film will exhibit iridescence. This phenomenon usually occurs at night, when the source of illumination within a building is fluorescent lighting. The amount of iridescence may vary from almost imperceptible to very visible. It most frequently occurs when the film is constructed with scratch resistance protection. When iridescence does occur in window film, the best way to stop it is to prevent the fluorescent light from illuminating the film or to use an alternative type of light.

Window tints can be used in applications like shopfronts windows, office block windows, and house windows. This is often done to increase privacy, and decrease heating and cooling costs. Window tints are used in some energy efficient buildings.

The thicker window films known as safety and security window film are designed to perform under extreme conditions, and as such there are specific standard criteria these films should meet, such as American standards ANSI Z.97, CPSC 16 CFR 1201, Cat II (400 ft-lb), and the British Standards BS 6206 (Class A, B, C). The European Committee for Standardization offer the EN12600 standard Classification of Resistance of Glazing to Impact. Often, building codes dictate that a film must have a report verifying that it has met at least one of these standards.

Solar window film is usually subject to less critical testing. However, standards are in place to maintain a level of quality in the industry. The ANSI Standards ASTM E903 and ASTM D1044-93 relate to the solar/UV transmission properties and abrasion resistance, respectively. The larger window film manufacturers use these standards to guarantee the quality of their raw materials and finished products.

Regulations for automotive use 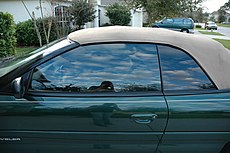 Window tint on a convertible in America. Tint on the front window is lighter than on the back window because of window tint laws. 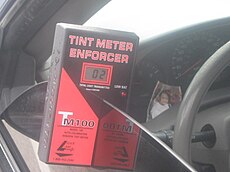 Photo of vehicle with illegal window tint being measured at 2% light transmittance.

Automobile window tinting reduces the “Visible Light Transmission” (VLT) through car windows. This can be problematic at night, or when motorists must be able to see through the windows of other vehicles in order to spot hazards. Police also may want to be able to identify the passengers in a vehicle. Therefore, in many jurisdictions, there are laws to restrict the darkness of tinting.

“Factory tint”, done at the time of manufacture is generally not an applied film, but instead is done by dyeing the inside of the glass with a darkened pigment; an electrical process known as “deep dipping.” The pigment gives the glass a tint, but doesn’t provide UV ray protection or heat rejection like most window films do. The average VLT of factory tint is between 15%-26%.